Rough Railway Crossings - Why, and Who Pays?

With more than 217,000 railroad crossings in the U.S., the experience of a jarring, rattled passage over such tracks is not an unusual event for motorists. Some grade-level railroad tracks provide a smooth passage, probably due to recent maintenance and improved techniques for building these intersections. Other crossings are in poor repair and are consequently hazardous.

Because the poorly-maintained crossings can incur significant damage to cars and other vehicles, it's important for drivers to know who is responsible and which entity is likely to cover those costs. But it's a complicated situation.

First, it helps to know how extensively railroads cross paths with motor vehicles. Of the more than 200,000 railroad crossings in the U.S., more than half (about 134,000) intersect with public roads. These conditions exist in the 49 continental states, but in highest concentrations in five states: Texas, Illinois, California, Kansas and Ohio. The railroads are largely owned by private companies, with the exception of the quasi-public Amtrak lines (using a tiny minority of all railways - most tracks are used for freight).

These intersections are prone to accidents and therefore much scrutiny by public safety officials. In the past decade, the accident and fatality rate has dropped sharply, from 3,237 accidents resulting in 421 deaths per year in 2001 to 2,004 accidents resulting in 261 deaths in 2010. According to the Federal Railroad Administration, this has come from a reduced number of crossings and miles of track overall, while the building of gated crossings (replacing flasher-only crossings) has been on an upward trend.

Who maintains pavement around railroads - and what are the implications?

Driving up to a railroad intersection may involve a smooth, recently-paved road. But that seamless pavement may suddenly break up - within 30 or fewer feet - just before, between and past the railroad tracks themselves. The driver who is experienced with this pavement will know to anticipate it by applying the brakes, but the newcomer may instead experience a rigorous test of his or her car's suspension system. Why?

Just who maintains those last few yards of pavement is quite variable. Ultimately, it is the responsibility of the railroad company that owns the tracks. Often, they work in a cooperative arrangement with the municipality through which the railway runs. But the maintenance itself is different because the construction of railroad crossings is different from the rest of the road.

To begin with, the weight of freight trains requires a certain "flex" in the rails and the supporting structure. This is why traditionally a railroad crossing involved specially-constructed timber ties, which allow a certain amount of give. Some railways employ rubber-based systems in between the rails. Track systems are also often raised, subjecting the entire embankment to a greater number of freeze-thaw cycles, which can be damaging to pavement where moisture is under the pavement (the classic cause of potholes in all pavement).

Not that the pavement quality leading up to railroad tracks, on county and state roads, is not important to safety. If the speed on a road is 40 mph or higher, special pavement markings are required at 25' to 60' in advance of the warning device (the railroad gate or flasher). Those marks on the pavement are a large "X" with smaller "RR" underneath, in white reflectorized paint - with the road basically serving as a large sign.

The problem of distances from asphalt plants


Another challenge with railroad track maintenance relates to the rural nature of many at-grade crossings. In urban areas, underpasses and overpasses reduce the number of railroad-street intersections. But because those are expensive to build and maintain in suburban and rural areas - and because traffic management is less an issue in smaller towns - railroad crossings that intersect with vehicular traffic are more common.

But those areas are found at greater distances from hot asphalt mix plants. This presents a costly and unwieldy problem: if hot asphalt is used to repair the pavement around the railroad tracks, it needs to be laid down very quickly. The quantity needed for these repairs is not as great as, say, when paving a stretch of road. So a full load of hot asphalt would most effectively be used over many crossings. But the time spent traveling from crossing to crossing allows that mix to cool, leading to waste in both product and manpower.

Cold mix asphalt can be used as a substitute because it has no such timing issues (it can be stockpiled and used as needed). However, an important distinction should be made between lower quality temporary patch asphalt and higher-quality permanent asphalt, such as polymer-modified cold mix. The latter is preferred also because it can be applied in all weather conditions, including in standing water.

The matter of railroad maintenance is for obvious reasons essential to commerce nationally, regionally and locally. The venerable CSX railway company, with more than 21,000 miles of rails in 23 states, spends more than a billion dollars annually to maintain pavement and safety features of its crossings. Undoubtedly some of that is to reimburse motorists for damages to vehicles caused by rough track crossings, but the railroad company sees better economics in preventing those damages from every happening in the first place. 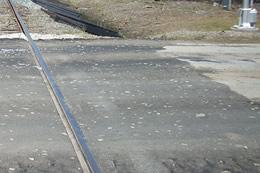 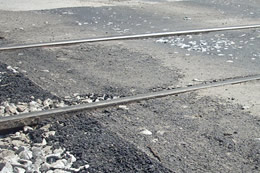