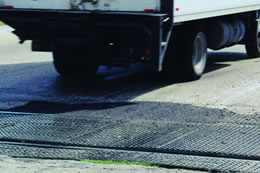 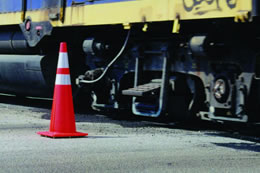 Repairing asphalt surrounding grade-level railroad crossings can be harder than it looks. But here is how the Florida Department of Transportation (FDOT) and CSX Railway managed the task to its best outcome - with minimal disruption in traffic. What's more, this repair was done in 1999 and is holding up quite well a dozen years later.

The area surrounding most railroad tracks allows for moisture to enter underneath the pavement. This is one reason why such areas tend to deteriorate frequently and before most of the rest of the roadway - and why spot-repairs with EZ Street cold asphalt make good sense. The vibration from mega-ton freight trains passing by several times each day does not help maintain pavement. It also complicates crossing pavement repair - a simple, fast process with EZ Street cold asphalt keeps traffic flowing on both the rails and the streets.

The first step in applying EZ Street asphalt is to remove all loosened pavement. Done here with a John Deere backhoe, workers were sure to eliminate all unstable adjoining asphalt. The crumbling pavement wasn't terribly big (about 3' by 5' in the largest section) or deep (between 6" and 9", once excavated). But when it is your car or truck that has to pass over and through such ruts, that's all it takes to damage the vehicle' undercarriage. At-grade crossings are a small but vital area of pavement for automobiles. The problem is that small amounts of asphalt are needed in multiple areas, a complication for hot mix asphalt trucks that cool when running from location-to-location.

EZ Street is available in 35-pound and 50-pound bags, and 500-pound and one-ton sacks. But with this particular application, the product came from bulk inventory. The product stores well at ambient temperatures for up to one year. In these quantities, and because stores of EZ Street on hand translate to when-you're-ready convenience, it is possible to fix one railroad crossing at a time - or dozens in one day.

Another complication of at-grade crossings is that maintenance of those crossings is usually the responsibility of the railroad, not the municipality. But some states, cities and counties are in close communications with the railroad company, and have contracts to do those maintenance calls themselves.

Applications can happen in summer sunshine, rain, in standing puddles or the dead of winter (at locations thousands of miles north of Miami). After clearing the spot of loose debris, the product should be laid down in 2" or less lifts. After compacting one lift, a second lift can be placed over the first.

Compaction can occur by hand tamping as well as with mechanized compactors - or just the wheels of a car or truck. In this case, the dump truck's tires were used for compaction.

The easy process of laying down EZ Street asphalt is as simple as it is strong. A deep crevice can be repaired in about ten minutes with multiple lifts and compaction. The fix will last as long as the road around it.